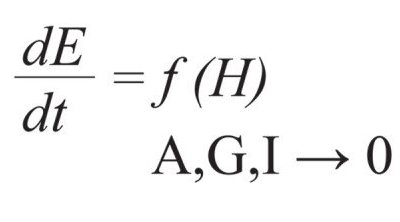 The Anthropocene Equation (Gaffney and Steffen, 2017) which when calculated demonstrates human activity overwhelming natural planetary systems. dE/dt is the rate of change of the Earth System; A is astronomical forcing (influence from beyond the planetary boundary); G is geophysical forcing (influence by volcanism, weathering, tectonic movement); I is internal dynamics of Earth (gas exchange, biogeochemical cycling); H is human activity or forcing (measured against the the glacial – interglacial limit cycle of the late Quaternary) and includes consumption by the middle and upper classes, energy use, and technological/political factors). What the equation shows is that human life on Earth (H) is not sustainable unless human forcing is more comparable to and synergistic with A, G, I. At the end of the day, human society collapses and control is returned to A, G, and I. This is all rather stunning. 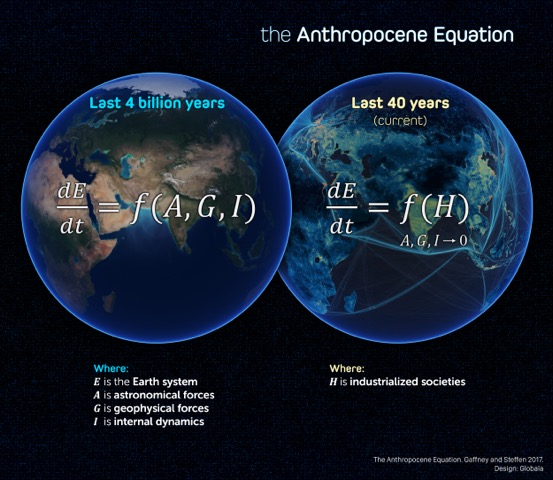 The term Anthropocene implies human domination of the planet, but can we really dominate the planet? Yes, but only for a relatively short time. At some point, nature will react and ultimately absorb and terminate the source of the insult. This is akin to the idea of an evolutionary change in a host-parasite relationship wherein a mutation that allows detection by the host is manifest. In nature, the parasite often is able to adapt to survive. But in earth, when that inflection point is reached, it’s all over.

Oceanographer Wallace Smith Broecker wrote, “The climate system is an angry beast and we are poking it with sticks.” We may be destroying millions of years of evolution and simplifying the planetary ecosystem, but ultimately, at some point, nature will react in a way that allows her to survive because the whole is more important than any part. The geologic record is filled with examples that show that nature bats last.