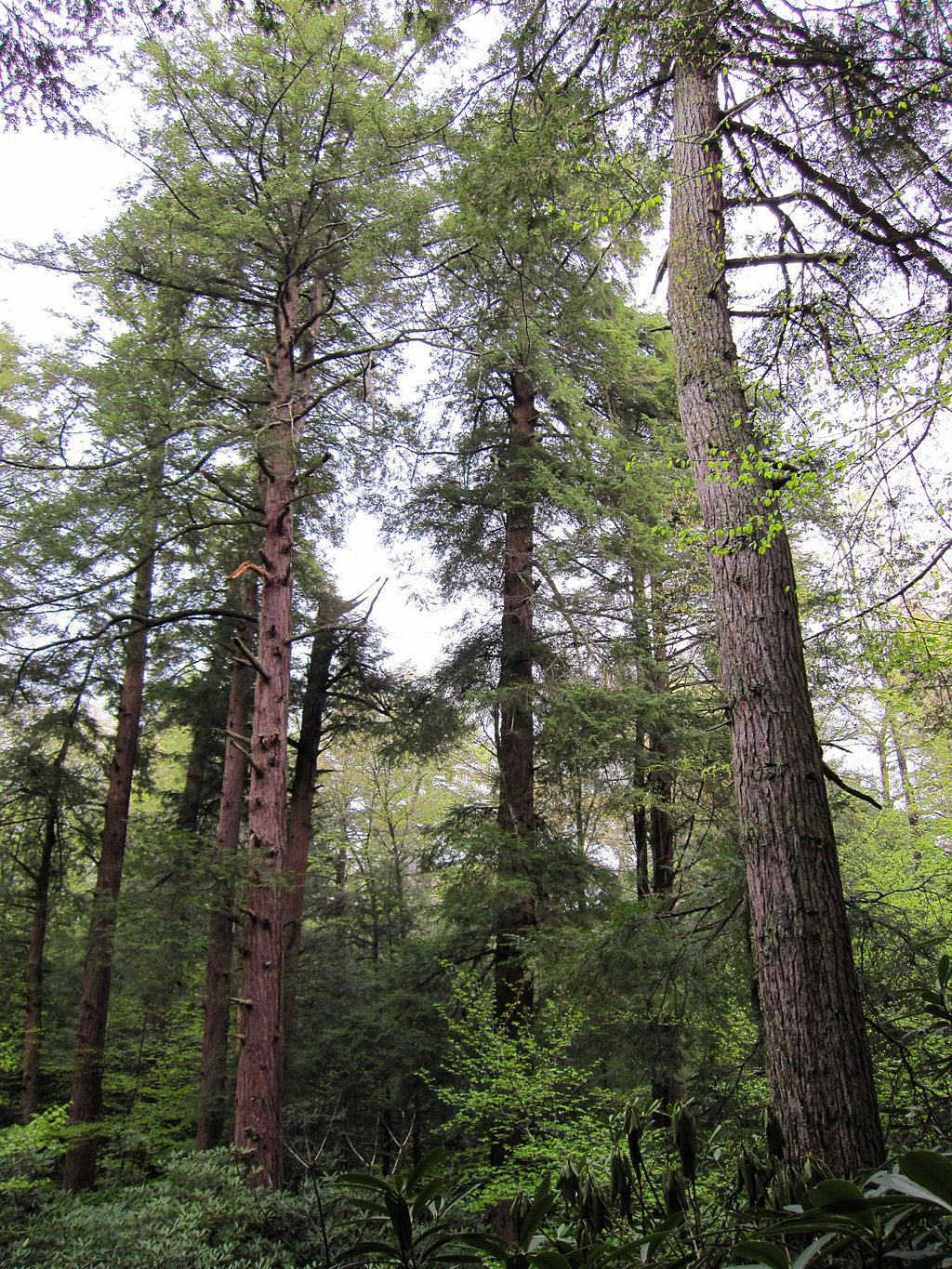 Late-seral stands are extremely rare in the East. Since they are involved in land protection in perpetuity, a primary mission of Eastern land trusts should be to restore their forests to this state. If kept free from forest management, protected forests will eventually harbor trees of 300 to 800 years of age with exceptional cavities growing above a thick, moist forest floor that is resistant to wildfire. Eastern old growth systems tend to have a greater level of biodiversity because they accumulate species over long time frames. Natural, undisturbed systems are also more resistant to invasion by non-native species and more resilient in the face of climate variation.

Here is a list of old growth/primary forest characteristics:

An abundance of old trees that are asymmetrical, high-canopied, deeply furrowed, and heartwood-decayed with prominent root structures and protruding dead limbs.

Fallen logs with a broad range of sizes, crisscrossing the forest floor, in various states of decay, lying in streambeds, and covered with thick mats of mosses and lichens.

Canopy gaps both large and small, generated by treefalls.

Undisturbed soils with a humus layer over one-foot thick.

Large trees for the growing conditions.

An abundance of lichen and fungi in acid soils.

Majority of tree species in late-seral stage with little to no multi-stemmed coppice regeneration (a logging legacy).

Absence of signs of human disturbance.

A mosaic of age groupings that are the imprints of the natural disturbance and recovery regime (here, gap-phase dynamics).

These are the characteristics that land trusts must foster to truly protect native biodiversity. Late-seral systems, once the most abundant habitat in the East, are now the most rare. This should be a cause for great alarm and serve as a catalyst for its restoration. How many opportunities do we as land stewards get to create and restore rare habitats, and do it virtually at no cost?

The manipulation of forests, from clearcutting to selection-system harvests, creates the artificial biodiversity that now dominates the landscape. It creates fragile systems easily overwhelmed by invasive species and other insults. We need to give the forest the freedom to re-armor itself.

Since old growth forests are rare and only come to exist with the passage of time, benign management is indicated in their restoration. The primary management strategy is to allow the system to mature to the harmonic primary forest, late-seral, old-growth stage of woodland succession. In the East, this means allowing the forest to return to what it was like in the mid-to-late Holocene, 3000 to 5000 YBP. The forest is essentially managed without human intervention so that nature is free to foster structure and function in her own way.

Active preserve management often means imitating natural disturbance to create or start the target outcome.  In the case of restoring old growth, time is the primary driver and thus management is in the form of defense: protecting the preserve’s natural communities from anthropogenic disturbance. Any active management is directed at protecting your boundaries, dealing with true hazards, and the removal and suppression of non-native invasive plants.

To ensure perpetual legal protection of the old growth state, trusts should consider granting a forever-wild easement on their old growth fee-owned properties to another trust. Optimally, such an easement would be given to a trust that has a demonstrated commitment to late-seral systems. I discuss forever wild easements in a separate article.

Since we know the characteristics of Eastern old growth, we can use them as metrics for stewardship. Management can include periodically documenting the development of such traits as the forest matures. While this data has great scientific value, it should also be used and shared internally and externally to maintain interest in the commitment to the old growth outcome.

Of course, the forest will not be a copy of what it was in the Holocene, as significant species are missing due to human activities and may never return (for example, American chestnut (Castanea dentata), a tree that, according to the American Chestnut Foundation, “survived all adversaries for 40 million years, then disappeared within 40″). Even now, the climax eastern hemlock (Tsuga canadensis) may disappear due to the hemlock woolly adelgid (Adelges tsugae). But again, and this is important to understand, the idea is to free nature to reach a stable state where complexity, architecture, natural disturbance, and time shape the outcome. Forestry distorts patterns and processes and prevents the development of the stable state. It constrains forests to operate within timescales comprehensible only to people, which is at most a human lifetime. 100-year-old trees are not yet even middle-aged. Yet foresters and forest managers constantly label older forests as decrepit, declining, and “overstocked” and in need of logging to improve “forest health”. I hear this repeated constantly by people in the land trust community who consider forestry a form of agriculture.  To that I say, trees are not turnips, and a forest is not a farm field. The reality is that the forest came before us, and did fine without our killing the trees to save it.

We are guardians, not gardeners.

It is expected that it will take at least another century for some late-seral characteristics to begin to appear in a century-old New England forest. Natural tree mortality and gap-phase dynamics will ensure the initiation of new forest age classes. Eventually, the forests will harbor hardwoods and softwoods ranging from <1 year to >600 years of age spanning the full range of shade tolerance. The complexity of such systems, where the primary structures and their diverse contributions to the forest are of grand scale, will support the return of abundant wildlife. Given the timescale required to attain this state, this is truly visionary stewardship.