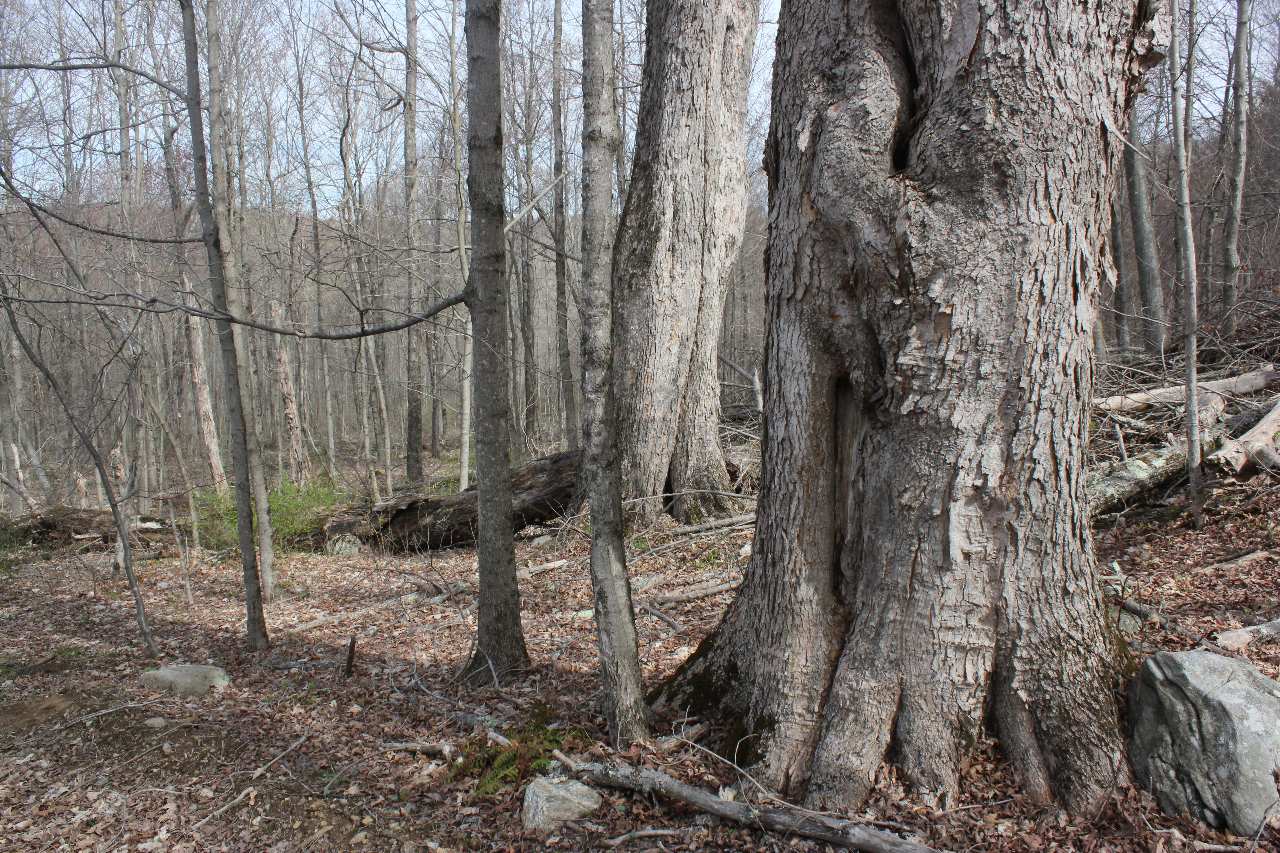 Land trusts are not immune to what I call the “disinformation vortex”. This is a phenomenon that most professional conservationists have experienced when dealing with board members or the public armed with common paradigms that have no basis in sound science. Disinformation vortices are based on RBIs – Really Bad Ideas. Examples of the range of RBIs in conservation include the concept of “novel ecosystems” and the acceptance or embrace of non-native invasive species; that we must log our forests to keep them healthy or to maintain forest diversity; that logging is a form of agriculture; that killing wildlife is the best way to control their populations; that state and federal wildlife and forest managers are by default conservationists; that giving better tax deductions for easements instead of fee donations is acceptable; and more. The disinformation vortex begins when an idea spins in someone’s head and ends when a forest is logged off. It’s always easier to save a forest by legally protecting it in the first place instead of trying to save bits and pieces once a logging application is received by the trust. It is imperative that land trust professionals and open-minded board members first turn to the peer-reviewed scientific literature for their information, and not rely simply on commonly held ideas, state and federal lands managers, the gray literature, and their old-timer neighbor before they start granting active reserve rights in easements or manipulating habitats.

I have written or will write about RBIs in other blog entries. Here, let’s focus on disinformation used against wilderness and forever-wild preservation.

Some of the most insidious attacks against wilderness and forever-wild preservation come from fellow conservationists, academics, foresters, lawyers, and others who claim that forever-wild preservation is simple thinking. These people are typically seen by land trust governors and land managers as authorities by default and their ideas and comments are taken at face value without verification. For example, here is a 2016 post to the Massachusetts Land Trust email list that was part of a discussion on forever-wild easement valuation:

A full analysis of the “forever wild” forest approach to conservation restrictions needs to consider the cost side of the equation. Massachusetts today has an abundance of mature (not but not true “old growth”) forest, so much so that the lack of young forest is having a distinct adverse effect on populations of a number of wild animals and plants that require sapling stage habitat. Even migratory birds that require mature forest for nest sites, need openings to feed their young and to build up energy reserves ahead of migration.

An example from my own town, Pelham, is a large forested area that was acquired under the condition, imposed by a donor of substantial funds, that there be no commercial forest management. When acquired, the site had been documented by the state as having present two state-listed species that depend on a mix of mature and young forest. As the forest has matured over the years, the presence of one species can no longer be confirmed.

Good, but simplistic, intentions can often have unintended adverse outcomes.

Here, we see a retired professor of environmental conservation advocating for the commercial felling of conserved forests, decrying the loss of early successional wildlife, and labeling forever-wild as “simplistic” thinking. He is essentially telling his readers that the maturing forest is causing an ecological crisis in the state. He speaks with authority and most non-scientists would believe him hook, line, and sinker.

Now let me say that this professor is well-respected, and rightly so, for some of his research, particularly in the realm of beaver biology and ecology. But here, he is triggering disinformation vortices that can lead to profoundly bad outcomes for real forest ecosystems. Words have power.

The problem is that his perspective is (1) not based in sound science, and (2) powerfully biased. A review of the white literature counters his claims and supports the defense of late-seral systems and easements that support their maturation. He is biased because he is the Chairman of the Massachusetts State Wildlife and Fisheries Board which by its very nature is primarily about creating habitat for game species and killing said species. MA W&F is not about preserving wildlife and wild places, it’s about conserving them for humans to exploit through degradation and killing.

But let’s stick to the science, shall we?

First, his use of the term “mature forest” is in a silvicultural sense, not a biological sense. It’s actually a silvicultural endpoint term – as in, time to cut the trees. Natural lifespans of our suite of forest trees range well into the many hundreds of years. According to the 2010 Massachusetts forest survey by Dr. Paul Barton, et al., most MA forestland is in the 75-year age class. These are young trees – yet mislabeled as “mature” – that are prime targets for harvest by loggers, foresters, and state forest managers. But we are land trusts, not timber companies, and not monitizers of the land, and we should be thinking along ecological timescales, not commercial timescales.

Second, the idea that there is a critical lack of early successional habitat is one that lacks a sound basis for comparison. Estimates of open/early successional habitat coverage in the pre-settlement forest (surveyed for the Crown) indicate that it probably did not exceed 1% of the total landscape. The literature indicates that 6% to 7% of undeveloped land in southern New England is in early seral – and that percentage is probably much greater now with the felling of thousands of acres of New England forestland for the New England cottontail (NEC) (Sylvilagus transitionalis) and its friends (with thousands more acres targeted). Also consider that there is a significant portion of the developed landscape in edge and shrub habitat.

There is also another false paradigm advanced here:  that “mature” forests are dense with a continuous closed canopy and thus interior birds are precluded from using them as habitat because there are a lack of gaps. This is simply not the case in such forests as they are obviously susceptible to disturbances in many forms, from windthrow to ice damage to insects and disease. Gap-phase dynamics are constantly in play as is evidenced by the broad range of age classes and diverse species suite that characterizes increasingly aged forests. We’ve known this quantitatively for over a hundred years. The reason that forestry people don’t see gaps is that they kill the forest before significant gap formation is realized. The current thinking is that harmonic gap formation takes about 125 to 150 years to manifest in a forest.

The typical argument in favor of reducing forestland to shrubland is “increasing biodiversity”. However, this is artificial biodiversity driven by human manipulation to bring and maintain early successional wildlife. In reality, we should be working with nature, not against it, and the best way to do that, and the most economical way, is to foster native biodiversity. We can’t use 1870 or 1940 biodiversity as a baseline. If we lose some early succession specialists, that is OK because they were only here because of the hand of man. They will live elsewhere in a landscape more appropriate to their life histories. The reward is that we increase habitat availability for and population sizes of the true biodiversity that is fostered by native structure and function. I address late-seral complexity below.

Furthermore, since the Commonwealth has publicly stated that it is their goal to fell 25% of the forests in the WMA system on behalf of the early succession-requiring NEC rabbit and its friends, it is even more critical for land trusts to protect their forests. And as much as I have tried, I cannot determine the source justification for clearing 25% of the state’s wildlife management areas. It simply does not exist in the peer-reviewed literature, even among researchers who repeatedly advocate for early states of succession. The science behind the NEC work is flawed at its very foundation, indicating that there are other forces at work. Some of these forces are old dominion and pragmatic-resource-use paradigms, some are based in grant money, and some are based in the forestry business that has an influence with MA W&F that is all out of proportion to its economic contribution to the state as well as to the wishes of most residents. The head of the NEC program in a nearby state (CT) essentially told me that regardless of the scientific arguments, he is leveling forests because of federal grant monies for the NEC and he is not turning away grant money. The truth finally came out after three hours of exhausting debate.

Third, complexity. Over the past 30 years, the literature has come around to reveal that late-seral systems are the most complex forest systems. Ecosystems and habitats collect species as they age. And we know that logging simplifies/resets forests. Old-growth stands have a larger range of tree sizes with a greater degree of structural complexity – larger live and dead trees, greater volumes of coarse woody debris, and greater volumes of snags than managed forests. The soils are deeper, too. Because of natural disturbance and gap-phase dynamics, they include the full suite of tree species from shade-intolerant to shade-tolerant, and all age classes. George Nichols of Yale published this fact in 1912 when he did a timber survey of the last virgin forest in Connecticut (in Colebrook, just south of Sandisfield, MA), yet there is a persistent paradigm that old systems are simple and that advanced forest age is a sickness. This is powerfully simplistic thinking.

Fourth, invasives. Managing for early succession/sapling/young pole forests creates prime invasives habitat – a reality that the logging/forestry community refuses to address. Disturbance, canopy reduction, exposure of mineral soil, and significant increases in solar inputs to the forest floor trigger invasive plant production. Anthropogenic early systems end up harboring dense source populations of invasives that radiate out to the surrounding landscape. There should be no logging without full invasive treatment before and after. In visits to several NEC clearcuts in CT and MA, I have seen no evidence of invasive control and plenty of evidence of invasive proliferation. There are no logging regulations that require invasive management even as invasives threaten post-harvest forest recovery. The forestry community ignores the long-term health of their own “crop” in favor of short-term financial gain. This reality also challenges the idea that foresters and loggers think at forest time scales.

Fifth, carbon sequestration. The literature is clear that older forests sequester more carbon than younger forests because of scale and all of their complexities. Recent research in MA found old growth live tree carbon pools to average 64 tons/acre, while the second growth stands averaged 51 tons/acre. Coarse woody debris/snag density is greater in old systems and this adds to the old side.

Sixth, landscape scale and context. Any activities to reduce forest complexity should take into account the greater landscape. Good science demands that we think beyond property boundaries and look at the diversity and proportion of habitats beyond.  Most foresters don’t do this because they only think in terms of economic units – parcel ownership.

Seventh, and saving perhaps the most critical element for last: rarity. Late seral systems are profoundly rare – ranking among the rarest in the east and beyond. They were once the dominant ecosystem type here, and now they are the rarest. This is rather profound. Stunningly profound. Clearly, since land trusts love rare species and habitats, a simple forever-wild easement can serve as the catalyst for rare habitat creation, restoration, and protection and move the type away from rarity. The professor bemoans the loss of a rare species that exists here because of the hand of man, while ignoring the fact that the true native forest (in all of its dimensions) is itself critically rare.

So consider: Which type of thinking is more simplistic?

Thoughts on Qualitative Versus Quantitative Approaches to Acquisitions Evaluation

The Passing of Conservationist John McNeely